This month the focus is on technique in my piano studio so I created these piano scale pattern mnemonic posters to display on my music studio bulletin board. 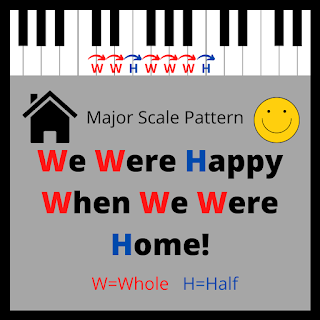 I like how the mnemonic for major scales relates to the sound of the scale.  Major scales sound happy!
I had a difficult time coming up with a creepy or sad mnemonic for minor skills.  I like to encourage students to come up with their own reason that "Harry Wore White" to help solidify the idea in their mind.  Maybe he was sad that his favorite blue shirt was dirty so he had to wear white? In retrospect I thought of "When Harry Was Wicked He Was Wailing" would be more fitting for the sad, creepy sound of a minor scale!😂  I've included both so you can choose your favorite. 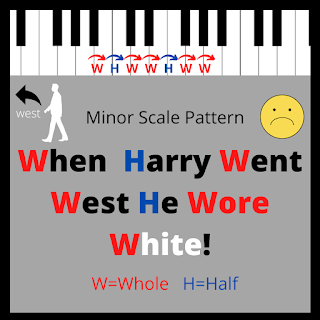 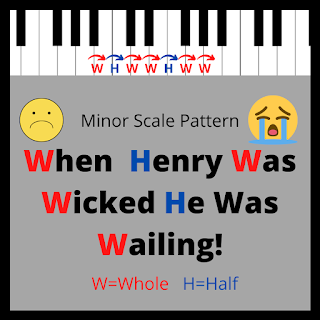 Susan Paradis's Whole Half Step Game  really solidifies the "recipe" of steps for creating a major scale starting on any key.  Giving students the scale "recipe" is kind of like teaching a man to fish.  It really boosts student's confidence when they  discover the keys they need to play for a new scale on their own by following the pattern instead of the teacher "handing them a fish" week after week by telling them which notes to play.
Click here to access the free printable scale pattern posters.
Related posts:
Teaching Piano Keyboard Skills Creatively
4 Types of Scales Teaching Video and Free Printable
Teaching Scales with a Story
Posted by Heidi's Piano Notes at 12:48 PM