Teaching Scales with a Story

Would you rather hear "Once upon a time... " or "This is .... This is.... This is....?"
For me, concepts cleverly couched in a story line become much more memorable than a dry lecture.  To introduce the sounds of the scales I created this story activity.
"Once upon a time a happy couple named Mr. and Mrs. Scale were excited to welcome some new scales into their family.  In time their 4 Scale daughters were destined for popularity and were heard throughout Musiclandia.  As their children grew, their true personalities began to show and it wasn't always pleasant sounding around the Scale home. 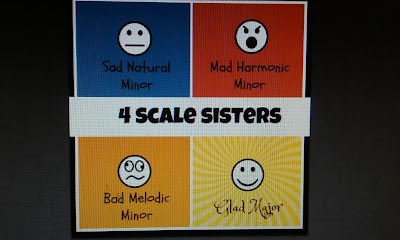 The first Scale was SAD.  She found it "Natural" to follow the key signature crowd.  But just following the crowd and not thinking for yourself doesn't usually make a person happy.  So she moped around sounding gloomy and was soon called "Natural Minor".
(Play a natural minor scale and then have the student add the white scale blocks to the keys) 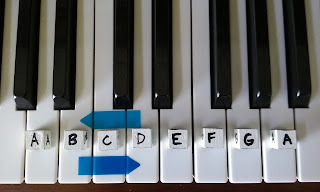 The second sister MAD was much like SAD.  When she climbed the stairs at the beginning of day she was sure to throw out  a sharp word while standing on a step leading up to the top of the home. (Have student close their eyes as teacher plays a harmonic minor scale and guess which scale step became sharp.- 7th)  She was nicknamed "Harmonic Minor" because she was only one half step away from Natural minor. 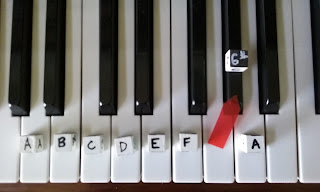 The third sister BAD was a bit two faced.  Just like Harmonic minor she was known to be sharp  sometimes (on 6 & 7) (play ascending a melodic minor scale) but she changed her tone whenever her parents or adults were around and returned to her natural self (play descending a melodic minor scale).  Mixed up "Melodic Minor" changed her melody based on who she happened to be facing but the overall effect of her presence was still a bit sad. 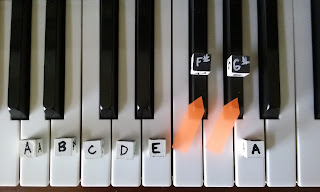 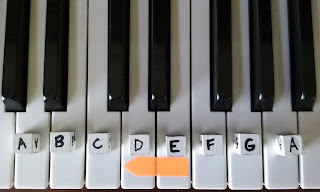 The last GLAD sister arose early and started out her day 3 half steps ahead of the rest (move scale blocks to form C Major scale) and she was therefore very happy.  Although she is still a relative to the 3 minor sisters, her sound is much more joyful and she stands tall as a MAJOR scale." 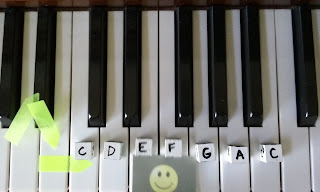 After hearing the story I play a quick listening game with my students as I play each of the scales and have them guess which one they heard.
Writing this post brought to mind one of favorite BYU college professors- Norm Nemrow.  He had a way of bringing the dry subject of accounting to life by telling compelling stories that made the principles of accounting very interesting and memorable.  Math had previously been a subject I had avoided because it seemed so dry, but I looked forward to attending his class each week because of his memorable teaching style.  If math can be fun, music theory can too!