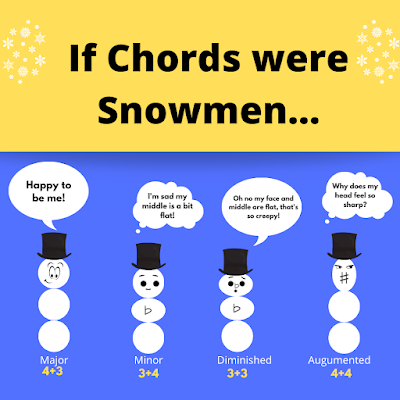 A picture is worth a thousand words... at least if you are a visual learner like me!  This poster for teaching chord qualities in my music studio makes the differences between chords stand out a bit more.
We've been playing several games this past month to review the half step patterns in chords.  At first glance when students see 3 skipping notes on the piano, it may look like the notes are the same distance apart, but counting the half steps between the keys helps them determine the chord quality.

Chords have a distinct sound or mood.

Listen to the root chord played by your teacher (or on teoria) and strike a pose for the chord you heard.

For more practice hearing and identifying chords choose from the following activities on teoria.com
Build Triads on the Staff
Hear Chord Quality
Build Triads on the Keyboard
Identify Chords by Sound or Sight (on the staff)
Posted by Heidi's Piano Notes at 4:13 PM No comments:

V7 chords can be a bit tricky for students because they are often introduced in many different ways.  Most method books start with an easier first inversion of  V7 chords that omits a few chord tones for easier playing.

This 7th chord poster makes it easier to spot the roots and intervals to identify 7th chords and their inversions. 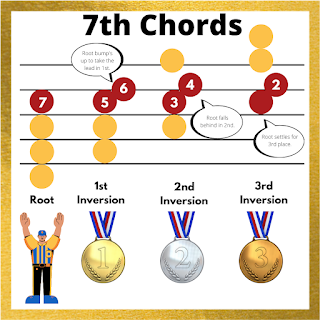 Look for the interval of the 2nd.  My teacher always called these the "bumps" because one note is bumped to the side. The top "bump"  is the letter name or root of the chord.
To identify the inversion, imagine the notes are running a race to the top of the staff.
V7 chords are often followed by a I chord in music. The interval of a 2nd in the V7 chord provides the tension and I chord feels like you are returning home to peace.

7th chords can also be identified by the intervals of the "bump notes."

7th chords in root position are easy to spot because they look like a tall snowman with four snowballs instead of the three you see stacked up in a triad.  The root is on the bottom and with the highest note a 7th above it.

The root jumps up to the top of the chord in first inversion.

The resulting intervals are a 3rd, 5th and 6th.

The abbreviated chord symbol is V6/5

Intervals above the lowest note include a 3rd, 4th and 6th.
The abbreviated chord symbol is V4/3

Intervals above the lowest note include a 2nd, 4th and 6th
The abbreviated chord symbol is V2

Posted by Heidi's Piano Notes at 11:50 AM No comments: