Teaching composing to beginners can seem like an enormous feat with a myriad of approaches.  There are many different pathways to arrive at the end result. This month I began with having students developing their "trash" motives into a short piece using the Trash to Treasure Composing resource on Teach Piano Today.  They loved seeing the printed score of their own creations from MuseScore!  Now we're moving on to the concept of adding an appropriate introduction to their pieces.
Bradley Sowash has some fabulous tips on how to create an interesting intro.  Using some of his concepts as a springboard, I created this listening lab to help my students hear samples of intro styles at work in pieces that are accessible to their playing ability.  Analyzing the composing elements within student's current pieces is a great way to extend their learning and wet their appetite for composing more artistically themselves. 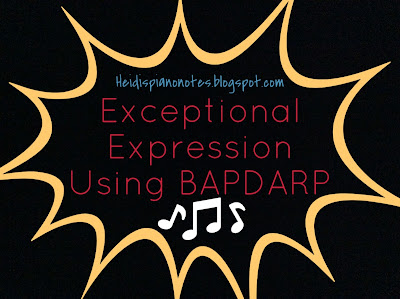 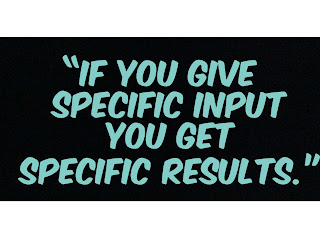 "If you give specific input you get specific results."  This was my favorite quotes from a UVMTA piano teaching seminar I attended last week by Stephen Thomas, a music faculty member at BYU-Idaho.
To start out the seminar  Thomas first gave a brief overview of score preparation and practice tips that he had covered in a previous seminar regarding score preparation and tempo.
Score Preparation - 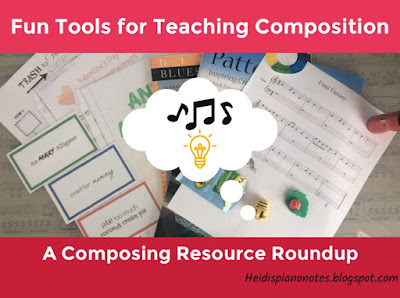 I've been scouring the web for fun activities and tips to help teach basic composition elements to my students and was delighted to see the link for Alfreds' latest blog post pop up in my inbox titled
"Composition Tips with Wynn-Anne Rossi."
The short video clips (about 3 minutes each) give students an opportunity to learn tips and tricks about composing from a well-known composer.  Following are a few of my favorite videos with specific assignments students can complete during lessons, lab time or at home.  If they complete them during home practice they can get an extra "Bull's Eye Target" marked off on their Bull's Eye Challenge Sheet.

"3-2-Won Major Chord Blastoff" is a quick game to teach chords in piano lessons in a memorable way. 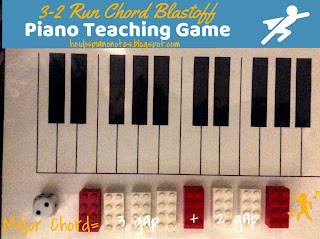 Recently Inspired by Tim Topham's approach to teaching chords to beginners  I came up with this game to reinforce the pattern of chord building so that even young students can remember it.


Materials needed: Paper Keyboards,  die for each player, legos or colored small objects
Object: Be the first to build a chord pattern with legos on the paper keyboard and play and spell it on the piano.
In this fast action game players simultaneously race to roll the "Major chord gaps" (a 3 and then 2) which reinforces the pattern in their mind.   It could be played in either a private lesson setting (teacher vs student) or at a group lesson with multiple students playing.
1.  Pick a music letter name card to choose which chord you are trying to build.
2. All players place a colored lego on the first note of the chord.

3. Start the race by saying "3-2-1 Blastoff". Players simultaneously race to roll a 3 on their die.

4. When a player rolls a 3 they place 3 white legos on the next 3 higher keys.

5. Next they place a colored lego on the middle note of the triad and then race to roll a 2.
6. After rolling a 2, place white legos on the next 2 keys and add a colored lego to finish off building the chord.

7. Then take note of the chord spelling (keys with colored legos) and "blastoff" toward the piano to spell and play the chord you just built in broken and block style. For C chord you would sing  "C-E-G, That's a chord " as you play the broken pattern CEG +3 blocked chords.

8. Repeat if desired choosing a new chord each time until a player wins 3 blastoff rounds.

What makes this game a win?

Fun Ways to Get Piano Students Practicing Smarter, Not Harder 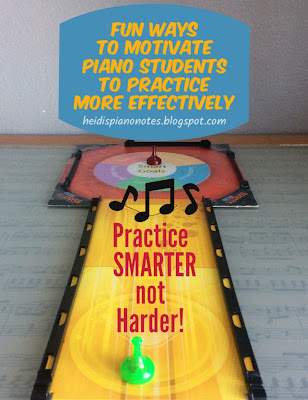 To kick off the new year in my piano studio our January group lesson will be centered around effective practice. I've planned some fun activities centered around goal-oriented practice including this adaptation of the Sorry Sliders Game that I've also been using for notereading review.