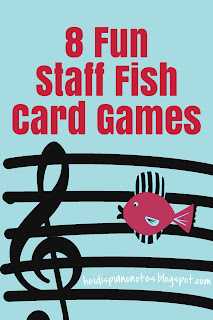 I love finding music games that are adaptable for multiple levels!  These Fish Music Flashcards from Susan Paradis have long been in my stash of Piano Games to use at lessons to increase note reading fluency,
but now that I'm organizing my game pouches to be sent home regularly with students I decided to include some instructions to explain the many different ways I use them.

Staff Fishing
Attach paperclips to each card and “fish” for cards using a magnetic fishing pole, identifying them by name when you catch them.

Scale Memory Match
Pentafish: Using only the Middle C- Treble C cards duplicate cards (or Middle C to Treble G for pentascale version) arrange the cards face down and take turns flipping the cards, identifying the note as you search for matches.
OR
Treblefish: Use all of the Treble cards (including the notes higher than Treble C that don’t have matches). If you pick a card above Treble C than you get to automatically add it to your own pile and turn another card.
OR
In Treble with Bass: Select bass and treble cards with the same letter names to matchup. For example, for a short game pull Bass C Pentascale (CDEFG) and Treble C Pentascale (CDEFG) cards from the deck and play memory match, or for a longer game use the the full 1 8va scales of Bass and Treble (CDEFGABC)

Don’t Eat Pete
Place 9 cards face up in front of you to form a 3x3 “Don’t Eat Pete” board” and place an edible on each square. Then choose one person to leave the room and cover their eyes. Say Sam is the one to leave. While Sam is gone, the other of the player(s) secretly choose one square to be “Pete” for that round. Then you can call Sam back into the room. But, shh! Make sure everyone keeps the identity of Pete a secret.  Sam then identifies note names as he choosing pieces of candy to eat while everyone else watches in anticipation. As soon as he touches the candy that’s on Sam, everyone yells as loud as they can, “DON’T EAT PETE!” Then Sam’s turn is over and someone else gets to go.
BINGO
Each player has their own game board.  Pick a card and cover the keys until someone gets Bingo, Four Corners or Blackout.

Tic Tac Toe
Place 9 cards face up in front of you to form a 3x3 “Bingo” board.” 2 Players take turns picking cards and cover the keys on 1 game board with their unique markers.  The first with 3 in a row wins.

Slap-Fish
Teacher Student Version: Teacher flips the cards over 1 at a time waiting 5 seconds between each card while the student tries to “slap” all of the C’s before the next card is turned.  If the student slaps a card that is not a C, the teacher gets to take the pile.  Shorten or lengthen the wait time based on the student’s ability, or change the Letter Name you are slapping.
OR
Student Group Version: With students of about the same skill level, divide the deck in 2, both students turn a card face up to the middle and students race to slap the letter name chosen.  The person to slap the card first gets to add all of the cards in the center to their pile and choose the next letter name to slap.

Minute to Win it Solo Fish Sort
Time yourself to see how many fish you can sort into music alphabet piles in one minute.

Go Fish with The B.F.G.
Play Go Fish with the entire deck as you try to collect pairs of 2 cards with the same letter name.  You can only ask your opponent for cards with the same letter name that you already have in your hand.  Three extra cards (B,F & G) do not have a match, so if you collect a B, F & G it counts as a double match.  Otherwise the game ends when there are only 3 cards remaining (B.F.G)