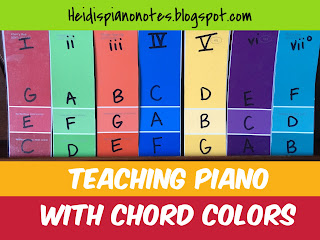 I've been associating chords with colors since my childhood, but now chord colors are taking on some new off the page creative roles after inspiration from the Creative Keys Conference.
My old Czerny books are covered in yellow (I) and red (V) as my first teacher had me use a colored pencil  for chord analysis for many of the pieces. 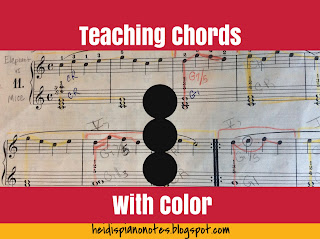 When I enrolled my son in Let's Play Music I changed up the color system in my studio so my lending library wouldn't confuse him or my Connections students who had learned primary chords with different color associations.

ANALYSIS AND MEMORIZATION
Coloring chords makes it easier for students to read music quickly as they group the chord patterns into chunks rather than focusing on just reading one note at a time. It can also aid in memorization as they easily spot repeating chord patterns in their pieces.  Before students jump into playing their pieces I often have them color code the chords.

SUBSTITUTION
And now that some of my students are diving into Forrest Kinney's Puzzle Play and learning about substituting major chords with minor chords I decided to expand the color palette when I made these paint chip chord cards for improvising at our group lesson Leila Viss style last month. 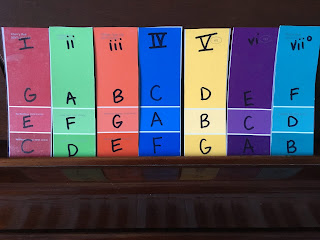 The primary chords Red (I), Yellow (V), Blue (IV), are the most often used, but seeing all artwork in just red yellow in blue gets old after a while so its more appealing to throw some new chords into the mix occasionally. 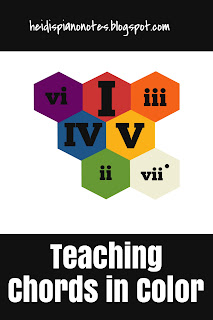 After playing a familiar song like Jingle Bells from a lead sheet I encourage them to experiment subbing out some of the major chords for minor ones. 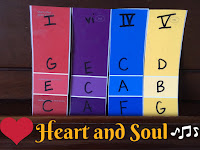 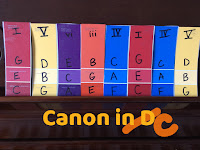 Introducing chords using these paint strips allows me to start even young beginners off with a solid chord foundation much sooner than if they were limited to only playing chords using the notes on the staff they can read.  After introducing the basic pentascales and major/minor chords by rote in the first few months of lessons students can see the practical application of chords as they play the accompanist role and play left hand chords while they sing along to familiar songs or play duets with me as I play the melody line for songs like Heart and Soul, Canon in D or Zootopia's "Try Everything." We also explore inverting chords into the more easily reached familiar I-IV64- I-V6-I chord progression.
At the Creative Keys Baroque Edutainment session, Leila Viss demonstrated how students can improvise together by borrowing famous progressions and having one student play the paint strip chords on the left side of the piano (blocked, broken or in a style of their choice) while another student picks a note of their choice from each paint strip to form a melody. Starting with chord parameters provides a "safe" start for nervous improvisers, but later they can branch add by adding passing tones or changing up the rhythms.


Coloring Chords is just one way to help students see the patterns in their music.  For more ideas about Handing over the Pencil in lessons to facilitate learning see my previous post. 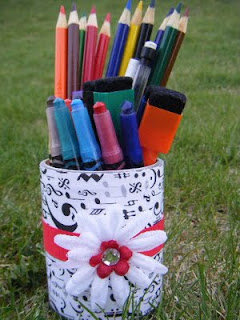