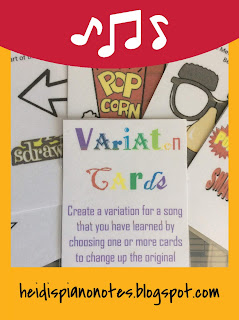 When motivation for playing piano was waning for one of my students after a busy day, I pulled out these variation cards and it was definitely a game changer! Not only did he have a new excitement about learning his new piece, but I was able to assess his knowledge and teach some theory and technique skills in a lively engaging way that drew him in asking for more.  He wanted to complete the entire set of cards!
Instead of playing the "What Changed" game, that I blogged about on this previous post, I instead used the variation cards as a springboard of ideas for the Variation Practice Challenge.

My variation cards simply include a basic idea for varying the song with an image to represent the change.
Scrambled Eggs- Mix up the Melody
Ornament Ending- Add a trill turn or other embellishment to the end of the piece
Snail Cheetah-Change the tempo


Haunted House- Change the mood or key
Popcorn-Vary articulation by adding some staccato notes
Bug to Beetle - Change up the Rhythm by doubling or holding notes
Handstand Man-Flip the texture - Moving bass, slow treble
Disguised Melody Man - Disguise the Melody by adding notes in between
LR Conversation - Alternate the melody between the Left and Right hands so it sounds like they are having a conversation.
Pop Thudd Plop Smack Poof -Add some sound effects to the beginning or end of the song.
drawkcaB - Play part of the melody backward
Surprise Emoji - Add some accents for surprise
fp - Add or change the dynamics
Skier on a slope - Add scale slopes
Haunted House - Change the key to Minor for a Mysterious Sound
Thin Thick - Change the Music Texture: Thin (single notes) to Thick (chords) or Thick to Thin
Waltz/March - Change the Time Signature Walt to March or March to Waltz
Block Broken - Change block chords to broken
Drop or Fly - Change the octaves of some parts of the song
Dot it - Change some straight rhythms to dotted