A Memorable Approach to Teaching Ties and Slurs 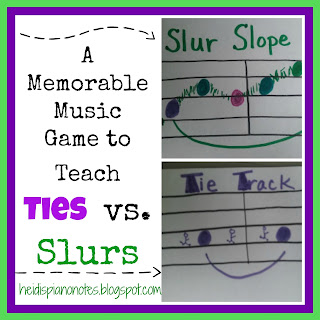 This week as one my students turned the page to unveil his next piece he said, "these lines are so confusing!"
His piece was filled with multiple ties and slurs on every line. So I handed over the pencil and had him color the ties one color and the slurs another after a brief explanation about the visual difference.

A tie connects 2 notes that are the same pitch (same line or same space). To identify ties pretend you are walking on the noteheads in your music.  Imagine a runner staying in the same track lane (line or space) on the staff and touching the "target notes" in his lane.

The 2 or more notes connected by a slur have different pitches (move up or down like running up and down a slope). The starting or ending note that a slur connects can be the same, but because of the notes in between that form a "slope" you know it is a slur. 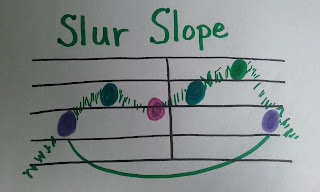 Music Tech Teacher Ties and Slurs Game is a fun way to check and make sure a student understands this concept. But I wanted to make it specifically relevant to the student's piece of music, so the following week we played a quick game.

Tie Track Slur Slope Game
Materials Needed: die, 2 game pieces and a sheet of music with a lot of ties and slurs.
Game Play: Start your markers on the first note of the piece.  Take turns rolling the die.  If you roll an odd number move to the next slur in your music and glide to the last note in the slurred phrase.  If you roll an even number move to the next tie in your music.  The winner is the first one to reach the last tie or slur in the piece.
A few songs that are great for this game are"Mr. McGill" (Piano Adventures Performance 2A), "For He's a Jolly Good Fellow" (Piano Pronto Movement 1) or "This Land is Your Land" (Piano Pronto Movement 1) but any song with multiple ties and slurs would work.
Posted by Heidi at 7:00 AM