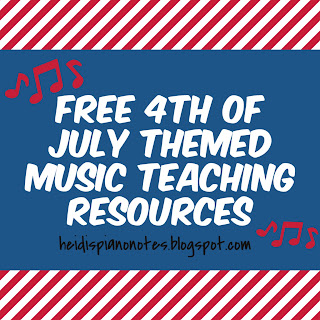 Piano students love to play familiar songs and over the years I've collected several free patriotic themed songs and activities to celebrate the 4th of July in addition to pulling out some of the patriotic/march music in my library.  I have listed them below in general order of difficulty including some of the teaching concepts included in the music/games.
I find it helpful to slip the music into sheet protectors in a colored 3 prong folder that students can "check out" from my library and then return after the holidays to be used in future years.

Favorites in my music library that I have purchased
Famous and Fun Favorites by Carol Matz Book 2 including:
America the Beautiful with Teacher Duet (# b natural)
When the Saints Go Marching in (staccato vs legato, #,b, hand shift)
Chord Time Piano: Ragtime and Marches 2B by Faber and Faber including:
The Thunderer by John Philip Sousa
The Stars and Strips Forever by John Philip Sousa
The Marines Hymn
The Caisson Song
You're A Grand Old Flag by George M Cohan