The background theme music of this Light the World video just puts me in the Christmas spirit! I also like the 4 focuses on different ways to serve each week...in the world, community, family and strengthening faith.

After picking out the music by ear on the piano for my own enjoyment,  I transcribed 2 easier duet versions for my piano students to play with me (or along with the video at home) that focus on different musical concepts. 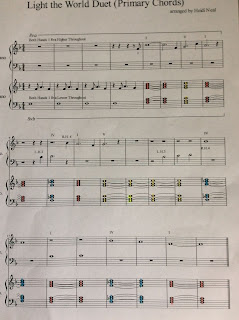 With this simplified chord version, I chose different preparatory activities to focus on based on the level of the student.

Concepts: Primary Chords in F Major, tied notes, Roman Numeral Chord Symbols.     First I have students color the chords with the roman numerals and this chord chart as their guide. Review the meaning of ties and have them count how many are in the piece.  They can skip the intro and just begin with the chords if the rhythms are beyond their ability. Playing chords along with the video is a lot more fun than just playing I-IV-I-V-I patterns alone as I have had students do in the past.  It also helps them see the purpose and context of chords right away instead of seeing it as a meaningless technique drill.
Concept: Ear Training Melodic/Interval Identification
Beginner: Play intervals from the first couple lines of the melody before the student sees the score and have them identify by ear the melodic direction of 2 notes (up or down)  by dictating with magnets on a white board.
Late Beginner: Interval (5th, 2nd) or both (Up 5th, Up 2nd, Down 3rd, Up 2nd).

Concept: Rhythm Intro to Eighth rests/Time Signature Review
All of the eighth note pickup notes can make this piece look a bit daunting for a beginner so I opted to notate all of them (except the first one) as quarter notes instead to make the piece accessible for beginners.  After discussing the "inaccurate rhythms" students could add flags and eighth rests after a simple explanation that flags make notes shorter,  but the Time Signature demands 4 beats so you must add an eighth rest to make up for it.

The lower part of this second version matches the video music more.
Concept: Intervallic Sightreading
Beginner: Students Sightread the lower bass clef whole notes as the teacher plays all 3 of the other parts.
Late Beginner: Students sightread the upper melody line which is split between both hands but doesn't require any interval stretches.
or
The lower part's repeating treble rhythms allow the student to mainly focus on the interval changes limited to 3rds, 4ths and 5ths with a few hand shifts. I usually hand over the pencil and have them prep the score by coloring the intervals first. The biggest challenge is usually remembering the B-flat's in the key of F so highlighting them can be helpful as well. 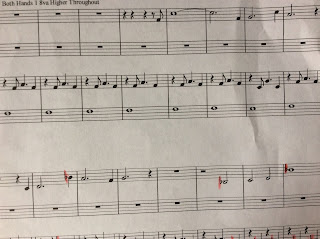