A Piano Metaphor: Growing from Failure to Failure 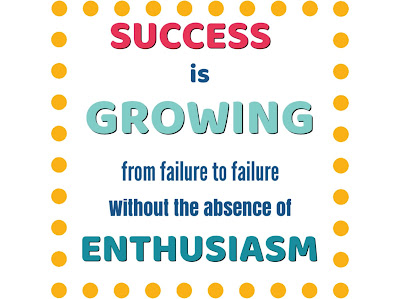 I loved these profound ideas from a recent inspiring message given by Lynn G. Robbins and his example of an inspiring college professor's approach to exams reflects my approach to piano theory exams.

I have a tendency toward perfectionism, and I too often allow what I perceive as my failures to weigh me down instead of propelling me forward.  I have seen this same struggle in some of my piano students as they feel defeated by a low score on Flashnote Derby and want to quit or find a piece difficult and exclaim, "This is too hard! I can't do it."I love the optimistic perspective of "growing from failure to failure" that makes me contemplate more about what I am learning from failure or who I am becoming because of my challenges.
I think one reason why I love to play the piano so much and loved practicing as a child, was that I could easily see my progress as I mastered a difficult passage that was at first a "failure," and I did feel a sense of enthusiasm when I was able to finally conquer something that had first felt like a failure.
Failure can feel so hard! My "failure" experiences at the Sonatina festival as a child are still so vivid in my mind.
When I entered the room for my first Sonatina festival as an inexperienced shy 10 year old, the judges told me I could warm up a bit while they finished up the prior student's judging sheet.  So I started to "warm up" with the first movement of my Sonatina, not giving full focus to details... just warming up my fingers.  When I finished the movement they told me to play the 2nd section as they had (unbeknownst to me) already been judging my performance of the 1st section since I started playing my piece instead of scale warmups. I was too scared to explain that I had merely been "warming up" so I just moved on to the middle as instructed and didn't qualify for the Honors recital that year.

The next year when I reached the end of Clementi's Sonatina#4 after playing what I felt was a well-polished performance, the judge said, "Well aren't you going to finish it?"  I was boggled.  She explained the meaning of D.C. (which I already fully understood), but since my teacher had instructed me not to play the repeats, and a Da Capo involves repeating something I assumed that I wasn't supposed to play it.
The next year I finally felt success when I qualified for the Honors recital :)

Robbin's professor applied this growth mentality in is college classroom when he allowed students to retake tests until they had mastered the concepts.  Although this approach may require more work on the teacher's part, I love this approach because it provides the opportunity for more potential growth in the students as they revisit their mistakes and learn from them instead of staying "stuck" in mistakes with a low grade that reflects failure.
I purchased theory exams from Wendy Stevens's Compose Create site many years ago and prepared students throughout the year for their annual once a year festival theory exam in the Spring.  Later I changed my approach and now allow students to take exams any time of year, retake the questions they missed to achieve mastery and move on to pass multiple levels each year if they desire.
Posted by Heidi at 2:04 PM