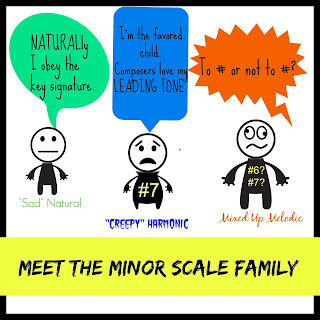 I've found that sometimes the minor scale patterns can be a bit overwhelming for students to remember.  I created this visual to help students see and hear the distinctions between the three types of minor scales.
I always think of a natural minor scale as a bit sad or melancholy and was surprised to hear one of students announce that he loves playing songs in minor keys.
The #'d 7th tone adds a creepy sounding appeal and of course makes the V7-i progressions sound so much more resolved, which is probably why the majority of minor pieces use the harmonic scale form.
I think of the melodic minor as kind of a "wanna be" major.  As the scale ascends, it starts with that distinctive minor flatted 3rd, but then the #6th and #7th tones almost trick you into thinking its a major scale.... until it returns to the natural minor form as it descends.
Posted by Heidi at 8:50 PM